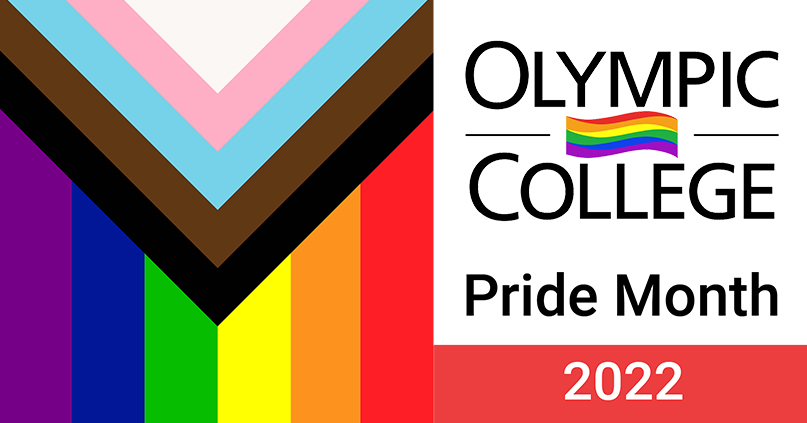 Now that the academic year is coming to an end, I want to take the opportunity to talk about Pride Month (June), before many of you leave for the summer.

For those of you like me, you are welcome here at Olympic College. You are welcome as a student, as a faculty member, and as an employee. You belong at OC, not simply “tolerated” or “accepted.” On the Bremerton, Poulsbo, and Shelton campuses or on Canvas, for our remote students, you are safe at OC. You can be you.

For those of you who do not identify as LGBTQIA+, your peers need your support and alliance. The college community is the keeper of its own culture. We need your support to maintain a college culture that is safe, welcoming, and inclusive. Show your support, even if it is just to tell a friend, a classmate, a coworker, or a family member that you are an ally.

It was not very long ago that it would have been unheard of to have an openly gay Vice President at a public institution. Homosexuality was classified as a mental disorder until 1974, five years after the Stonewall Riots. Gender identity was listed in the Diagnostic and Statistical Manual of Mental Disorders (DSM) as a mental disorder beginning in 1980, labeled as “transsexualism.” It was not until 2019 that the World Health Organization removed gender nonconformity from its list of mental disorders. This is what Pride Month is about. Recognizing where we came from, those that led the way for change, acknowledging where we are now, and celebrating what has been accomplished and what is ahead.

Harvey Milk said, “All young people, regardless of sexual orientation or identity, deserve a safe and supportive environment in which to achieve their full potential.” OC is committed to being that environment for both our students and employees.

Olympic College will have a booth at the Kitsap Pride (July 23) and Bainbridge Pride (July 17) events. We hope to see you there! There will be plenty of OC branded swag to handout. Both Human Resources and Student Services will be manning the booth to show our support for current students and employees as well as to recruit new ones.

Olympic College has invited a special guest to help us out with photos and greeting visitors to our booths. They have already had a brief tour of the campus and a meeting with our President. The problem is, we do not have a name and we need your help. Please vote for the best name for our guest. The name with the most votes will become official!  Voting closes June 14.

Happy Pride and we look forward to seeing you at our OC booths at the Kitsap and Bainbridge Pride events in July!